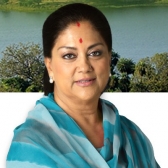 Education
No data found
Experience
No data found
Achievements
Politician needs to claim his/her profile to show the achievements.
Click here to claim this profile.
No data found
Show Next
Claim
Election card or Aadhar Card
1) If you are an incumbent (Sitting Member), we need your id card which shows your photo as well as your constituency area and your designation (MP, MLA, Corporator, Mayor, District or Taluka Panchayat Member etc.)
2) If you are not an incumbent, a challenger, we need your party id and aadhar card.
Submit
About

In March 1998, the nation elected the 12th Lok Sabha in which BJP clinched a humungous mandate of 182 seats. It was Shri Atal Bihari Vajpayee who was sworn in as the Prime Minister of the nation for the tenure 1998-2004. During this time, Vasundhara Raje was not only elected as the MP from Jhalawar but also sworn in as the Minister of State in the Ministry of External Affairs, a department which was personally headed by the Prime Minister himself. Notably, Vasundhara Raje got an opportunity to work closely under the Prime Minister. Atal Bihari Vajpayee has been described as a large influence in Raje’s life. After being appointed as the Minister of State for External Affairs, Vasundhara pioneered the drive of strengthening Indian relations with a multitude of countries, thereby creating an amicable external environment of peace, security, collaborated personnel development among many other aspects. Vasundhara also received a battery of delegations from across the world. In 1998, India became highly equipped with nuclear capabilities, thereby becoming an influential nuclear power in the World. Nonetheless, this new status was regarded contrarily by the World community, while it was highly encouraging for the Indian community. The International community imposed sanctions on India. Raje became the face of India’s Foreign policy. She engaged with various sections of the international community and succeeded in restoring confidence of global communities towards the country. The International community withdrew sanctions in no time.