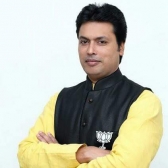 Education
No data found
Experience
No data found
Achievements
Politician needs to claim his/her profile to show the achievements.
Click here to claim this profile.
No data found
Show Next
Claim
Election card or Aadhar Card
1) If you are an incumbent (Sitting Member), we need your id card which shows your photo as well as your constituency area and your designation (MP, MLA, Corporator, Mayor, District or Taluka Panchayat Member etc.)
2) If you are not an incumbent, a challenger, we need your party id and aadhar card.
Submit
About
On 8 August 2017 Biplab Deb helped bring about the defection of Indian National Congress MLAs led by Sudip Roy Barman to the Bharatiya Janata Party[7].He led the local BJP into the 2018 Legislative Assembly election, attempting to gain office after 25 years of Left Front rule. He contested the election from Banamalipur Constituency in Agartala, which was held by Indian National Congress MLA Gopal Roy. He also faced Communist Party of India (Marxist) youth leader Amol Chokroborty. Biplab Deb led a door to door campaign in his constituency with senior leader Sunil Deodhar.He won the Banamalipur Seat by a huge margin of 9700 Votes defeating Left Front's Amol Chokroborty. He lead the Tripura's Election campaign and successfully defeated Left Front after 25 years by winning 43 seats with his ally Indigenous Peoples Front of Tripura out of possible 59 seats in Tripura. The very Next Day after the results he went to CPIM Party Office in Melarmath area of Agartala to seek blessings for his new journey from Ex Chief Minister Manik Sarkar and payed his tribute to the late minister Khagendra Jamatia. Biplab Deb also warned his fellow party workers to stay away from any sort of violence in Tripura. Biplab Deb will be the Youngest Chief Minister of India currently after Devendra Fadnavis