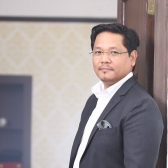 Organizations who donated to Conrad Kongkal Sangma also donated to...

Education
No data found
Experience
No data found
Achievements
Politician needs to claim his/her profile to show the achievements.
Click here to claim this profile.
No data found
Show Next
Claim
Election card or Aadhar Card
1) If you are an incumbent (Sitting Member), we need your id card which shows your photo as well as your constituency area and your designation (MP, MLA, Corporator, Mayor, District or Taluka Panchayat Member etc.)
2) If you are not an incumbent, a challenger, we need your party id and aadhar card.
Submit
About
Upon completing his studies, Sangma started his political career in the late 1990s, as the campaign manager for his father, P. A. Sangma for Nationalist Congress Party (NCP).[5] He contested his first election in 2004 losing by 182 votes.[6] He was first elected to the State Assembly along with his brother James, both as NCP members in the 2008 state elections and later held several important portfolios in the state cabinet,[7] including the Finance, Power, Tourism, GAD and IT and presented his first annual budget for Meghalaya within 10 days of debuting as a minister. From 2009 to 2013 Sangma held the post of Leader of Opposition in the Meghalaya Legislative Assembly. In March 2016 he was elected national president of the National People's Party (NPP) following his father's death earlier that year.[8] In May that year, contesting from Tura at the by-election to the Lok Sabha, he won by a record margin of 1.92 lakh votes