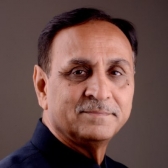 Education
No data found
Experience
No data found
Achievements
Politician needs to claim his/her profile to show the achievements.
Click here to claim this profile.
No data found
Show Next
Claim
Election card or Aadhar Card
1) If you are an incumbent (Sitting Member), we need your id card which shows your photo as well as your constituency area and your designation (MP, MLA, Corporator, Mayor, District or Taluka Panchayat Member etc.)
2) If you are not an incumbent, a challenger, we need your party id and aadhar card.
Submit
About
The new incumbent Chief Minister of Gujarat since 07-08-2016, Shri Vijay Ramniklal Rupani, is really a true and well mannered humble personality. Sangh culture, disciplined and tireless efforts are the pillars of his political career and the aura of his originality. He was born on 2nd of August in 1956, the month with revolutionary impact, adorning him with this unique responsibility to lead the Government in Gujarat, at the age of 60, provides him with base support.

Vijay Rupani started his career as student activist associated with Akhil Bharatiya Vidyarthi Parishad (ABVP). He joined Rashtriya Swayamsevak Sangh and subsequently joined Jan Sangh in 1971 has been associated with Bharatiya Janta Party since its establishment. He was imprisoned for 11 months at the jails in Bhuj and Bhavnagar during the Emergency in 1976. He was a Pracharak of RSS from 1978 to 1981. He was elected as a corporator of Rajkot Municipal Corporation (RMC) in 1987 and became the chairman of drainage committee. The next year became the chairman of standing committee of RMC from 1988 to 1996. He was again elected to RMC in 1995. He served as the mayor of Rajkot from 1996 to 1997. He became BJP's Gujarat unit general secretary in 1998 and served as the chairman of manifesto committee during chief minister-ship of Keshubhai Patel. He was appointed as a chairman of Gujarat Tourism in 2006. He was a member of Rajya Sabha from 2006 to 2012. He served as BJP's Gujarat unit general secretary four times and chairman of the Gujarat Municipal Finance Board in 2013. during chief minister-ship of Narendra Modi.

On 19 February 2016, Rupani became the state BJP president, replacing R. C. Faldu. In August 2014, when Vajubhai Vala, the incumbent speaker of Gujarat Legislative Assembly, resigned as the MLA from Rajkot West Constituency as he was appointed as the governor of Karnataka. Vijay Rupani was nominated by the BJP to contest his vacant seat. He won the bypoll on 19 October 2014 by a huge margin.

He was inducted as minister in the first cabinet expansion by Chief Minister Anandiben Patel in November 2014 and held the ministry of transport, water supply, labor and employment. He was the BJP state president from February 2016 to August 2016.