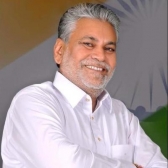 Education
No data found
Experience
No data found
Achievements
Politician needs to claim his/her profile to show the achievements.
Click here to claim this profile.
No data found
Show Next
Claim
Election card or Aadhar Card
1) If you are an incumbent (Sitting Member), we need your id card which shows your photo as well as your constituency area and your designation (MP, MLA, Corporator, Mayor, District or Taluka Panchayat Member etc.)
2) If you are not an incumbent, a challenger, we need your party id and aadhar card.
Submit
About

Parsottambhai Rupala (born 1 October 1954) is a member of Rajya Sabha representing the Indian state of Gujarat and a leader of Bharatiya Janata Party. He was the state president of the party.

He served 3 consecutive terms as a member from Amreli Constituency of Gujarat Legislative Assembly ending in 2002. He was a Cabinet Minister in Narmada for Irrigation and Water Supply from 19 March 1995 to 20 October 1995 and again from 4 November 1995 to 18 September 1996; and for Agriculture from 9 October 2001 to 21 December 2002. He chaired the Public Accounts Committee of Gujarat Legislative Assembly from March 1997 to December 1997.He was the Chairman of Gujarat Industrial Development Corporation (G.I.D.C.) from June 1998 to October 2001.

He was again elected to Rajya Sabha in June 2016 in by-poll which was necessitated due to the death of sitting Congress MP Praveen Rashtrapal. His term will end on 2 April 2018