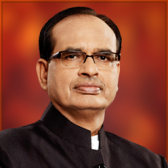 Organizations who donated to Shivraj Singh Chouhan also donated to...

Education
No data found
Experience
No data found
Achievements
Politician needs to claim his/her profile to show the achievements.
Click here to claim this profile.
No data found
Show Next
Claim
Election card or Aadhar Card
1) If you are an incumbent (Sitting Member), we need your id card which shows your photo as well as your constituency area and your designation (MP, MLA, Corporator, Mayor, District or Taluka Panchayat Member etc.)
2) If you are not an incumbent, a challenger, we need your party id and aadhar card.
Submit
About
Born on March 5, 1959 in a farmer's family of Shri Prem Singh Chouhan and Smt Sundar Bai Chouhan at village Jait in Sehore district, Shri Shivraj Singh Chouhan is a Gold medalist in Masters of Philosophy from Barkatulla University, Bhopal. A true son of the soil, he can easily identify himself with the socio-economic concerns of farmers, villagers and commoners. Inclusive development and prosperity for all is the life mantra of Shri Chouhan. A true patriot and the torchbearer of Indian values, Shri Chouhan is a compassionate leader right from an early childhood. His leadership skills first came to fore when he was elected as the President of Model Higher Secondary School Student's Union in 1975. He participated in underground movement against Emergency and was imprisoned in 1976-77 and on several other occasions for various political agitations and public causes. Shri Chouhan is a volunteer of Rashtriya Swayamsevak Sangh (RSS) since 1977 and since then he has been an active social worker and a popular leader.