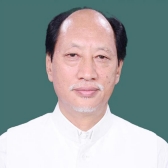 Education
No data found
Experience
No data found
Achievements
Politician needs to claim his/her profile to show the achievements.
Click here to claim this profile.
No data found
Show Next
Claim
Election card or Aadhar Card
1) If you are an incumbent (Sitting Member), we need your id card which shows your photo as well as your constituency area and your designation (MP, MLA, Corporator, Mayor, District or Taluka Panchayat Member etc.)
2) If you are not an incumbent, a challenger, we need your party id and aadhar card.
Submit
About
On joining politics, Rio was first elected to Nagaland Legislative Assembly as Congress (I) candidate from the Northern Angami-II constituency during the 7th General Elections of 1989. He was appointed as the Minister for Sports and School Education and subsequently as Minister for Higher & Technical Education and Art & Culture; also served as Chairman in Nagaland Industrial Development Corporation, Nagaland Khadi & Village Industries Board and Development Authority of Nagaland. Rio was again elected from the same Constituency in 1993 as Congress (I) candidate and appointed as Minister for Works & Housing.[2] As a member of the Indian National Congress, Rio was Nagaland's Home Minister as part of the cabinet headed by S. C. Jamir from 1998 till 2002 when he resigned from the ministry accusing Chief Minister S. C. Jamir of blocking a negotiated settlement of the vexed Naga issue.[3] After his resignation, Rio joined Naga People's Front which partnered with other Naga regionalist parties and the state branch of the Bharatiya Janata Party (BJP) under his leadership to form the Democratic Alliance of Nagaland (DAN), a coalition which won the 2003 state elections, bringing the 10-year-long rule of the Indian National Congress in the state to an end. Rio subsequently took office as Chief Minister on 6 March 2003.